Is this THE Aerobed?

Currently YES, this is the best-rated Aerobed. Our new update to the review the reviews should shed some new light on the matter. We’ve been working hard to bring you a LOT of NEW info from some new featured testers, and we think these were a well-spent two months.

Current Ratings of the Aerobed Premier 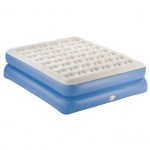 Comparison to the currently top-rated model

What’s so different about this portable airbed??? Few words about Aerobed the company

Aerobed began its story in 1992 and got its rightful place on 3Beds not long after. Needless to say, we go way back.

The company was all about innovations when it all started. They still follow that principle today, in case you were wondering.

The REVOLUTIONARY technology they entered the arena with was a new, patented inflating system. Instead of spending half an hour blowing up your mattress, all of a sudden, it could be done in under a minute.

Deflating it was reduced as well, to less than 15 seconds via quick-release valve.

We’ve done some new, interesting tests, and gathered a BUNCH of new user reviews and ratings. We’ve also contacted a lot of people who bought this mattress in search of all the info we could possibly find.

This article will focus on the user reviews and ratings of this mattress, and we’ll follow it up with a second piece featuring mechanic tests results done by our team.

We hope NEW information, FRESH test results and EXPERIENCES coming directly from the buyers will be enough to make this read worth your while. Moreover, we want to help you make the final cut if this is the blow-up mattress you were thinking of buying. NOW, that we did all the catching up, we can finally get some actual WORK done.

Aerobed was never big on talk, in our experience. So, let’s see if our fellow customers can put a bit of “meat” onto this basic introduction. What the users liked about this Aerobed air mattress in their reviews:

Parts of the negative reviews of this mattress: This model is not the best Aerobed, but its is currently second top-rated model of the brand on our website, right after classic double-high.

Having said that, it’s a very good and widely accepted air mattress, which also performs very well on our tests. It’s been around for a long time now, and you can’t achieve that kind of presence without sheer quality. Successful marketing campaigns can only take the story so far.

The main forte here is the speed and ease of the setup process. Inflation in under a minute, deflation in 15 seconds, perfect! It’s also very LIGHT, so you can move it around even when fully inflated.

It doesn’t lack in the comfort department as well, although, customers are split in their opinion on the indentations. Some like them, others say they’re the worst thing ever. If you fall into the second category, the solution to your problem is just one memory foam topper away.

The carry bag that comes with it could use a bit of a touch-up, but we’re not really considering this a major CON.

The next update to Premier Aerobed is due in exactly two months. We’ll gather new info and user feedback, but we also have a little surprise for you, so stay put.

No, I can’t even whisper about it for now.