New tests for this update

Before we move onto the results and list the TOP 3 best air mattresses, we'd like to use the opportunity to thank the Denier Martin Lab, Boston, MA who helped us with the tensile testing of the vinyl samples.

We've been working on including the DMA (Dynamic Material Analysis) into our ratings but getting the methodology right wasn't a simple task. Below are the current ratings. 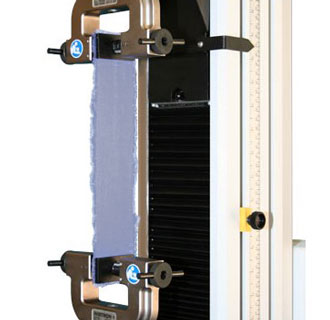 How we test & rate the Airbeds 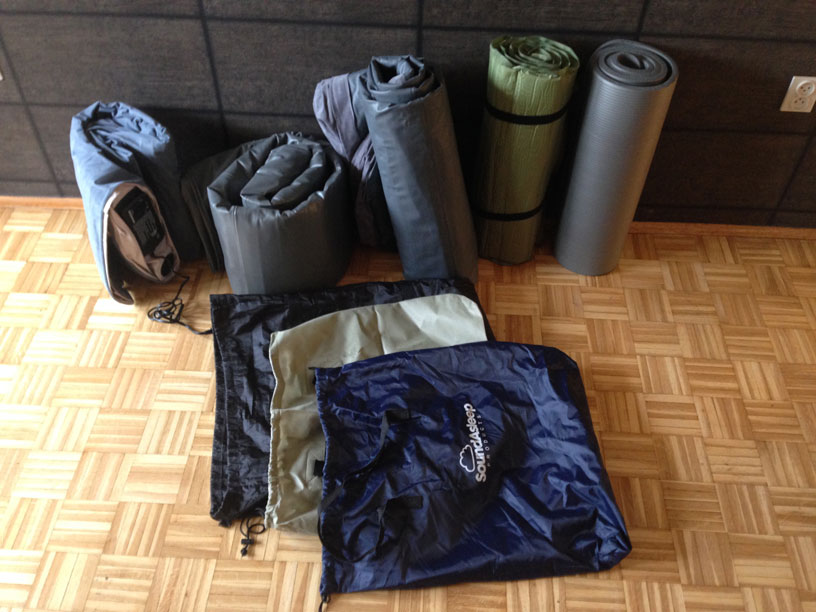 By far the most popular

It’s been years now since we first started testing & reviewing air mattresses. If you asked us in 2012, we’d say that there nothing new that could happen to disrupt the industry.

Come 2013, a new brand, SoundAsleep, launched their first model – Dream Series. Not only did it change the industry but, within 6 months it was the most sought-after air mattress out there. It is currently by far the most popular among users & the best air mattress in our ratings. 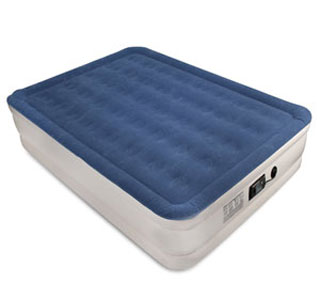 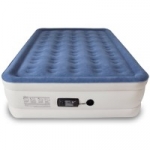 The only 0.6 MM thick vinyl

There's no similar air bed on the market in terms of sheer durability. This Fox is the only model out there to move the industry standard from 0.4 mm thick vinyl to 0.6 mm.

That resulted in a bed that's harder to puncture, plain & simple. You can see more details about the upsides and shortcomings of being thicker and bulkier in the full review (link in the yellow field below). 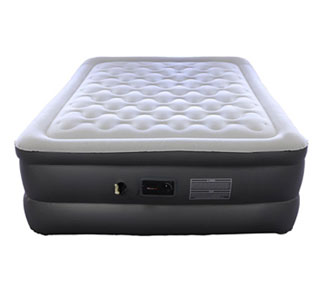 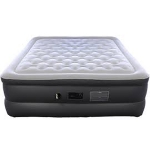 If you asked a few years ago if we could imagine an Intex model in the Top 3, we'd shrug it off. Not that we have anything against Intex, but they have a certain, let's say, reputation. It's a reputation of catering to the chunk of the market that's looking for cheaper air mattress that are less likely to last and be as comfortable as the top models.

That changed when Intex introduced the FiberTech technology. There really is no comparison between their older models and any piece based on FiberTech fibers. Yet, somehow, they managed to keep the cost down.

You can see what FiberTech is & whether this inexpensive Intex might be for you in the full review (link in the yellow field below). 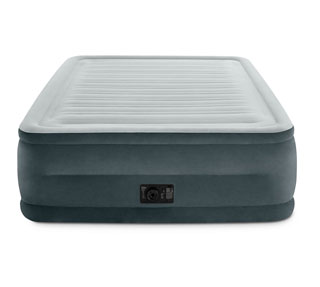 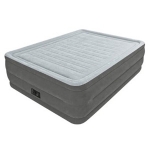 The specs of the Dream Series Twin:

We’re used to Sound Asleep’s exhaustive specifications by now. Let’s filter all these claims through some good (and bad) user experiences to see which parts of the story hold water, like the thickness of the PVC (image below). 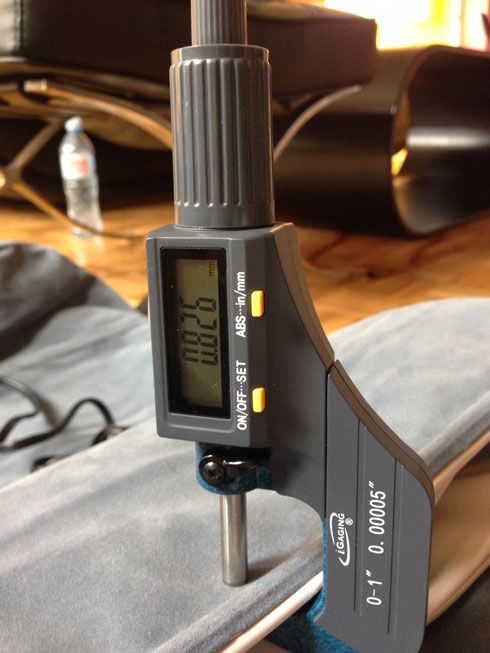 PROs from user and testers: 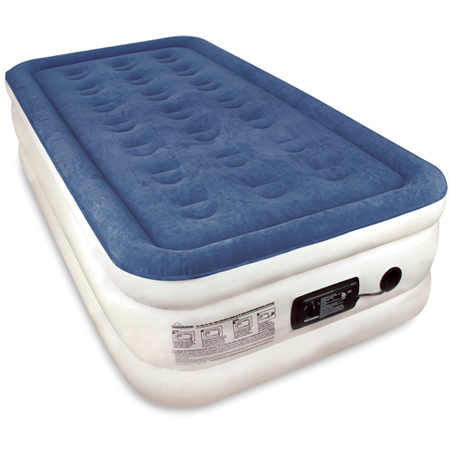 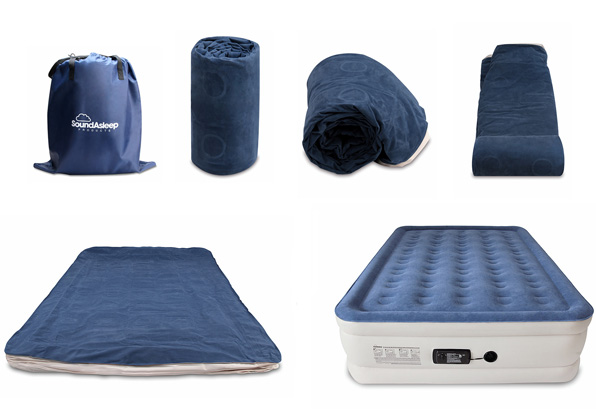 I don’t think we need to talk at length about our position when it comes to SoundAsleep products.

We’ve been testing and reviewing Dream Series ever since it first appeared on the market in 2013. It started out slow, but when people realized the quality behind the brand, it sent the sales number through the roof.

We’ve also been monitoring the situation and the future plans of Somnio LLC, the owner of the brand, and they announced some new models coming soon, so we can’t wait to see what designs come out of their New Jersey base of operations.

ComfortCoil Technology is one of the main selling points of this series. It did a wonderful job at separating the internal air chambers into 40 separate compartments, drastically increasing the comfort, support and the overall stability of the construction. It's what makes it the best air bed Overall. 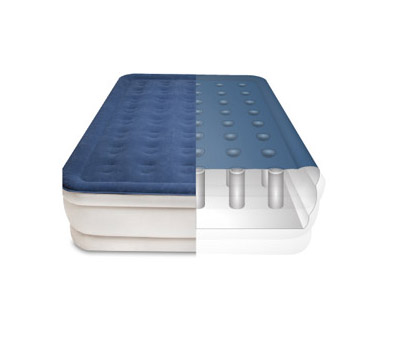 Illustration of the Comfort Coil technology

A great deal of their patented technologies also found its way into this series. Besides the chambered design, we’ll also mention their patented electric pump, which just adds a cherry on top of a functional and practical design.

We could also say that the proverbial cherry is embodied in the form of Eco-friendly materials. The PVC used here doesn’t emit any harmful substances such as phthalate particles since no plasticizers were used in the plastic-softening process. So, that’s just one less safety issue to worry about.

The sleek lines and elegant design is also a point that hasn’t escaped our fellow customers. We've seen in mention in the air mattress reviews, and we agree.

Yes, they are quite heavy, even when completely deflated. We know there’s a general opinion out there that air beds are light and feathery, but that’s really not the reality of it. They’re pretty heavy, so they’re not our best option for backpacking or similar endeavors. So, unless you’re car-camping, we wouldn’t recommend any of these.

The built-in pump DOES get pretty loud, but it doesn’t need to be activated all that often due to excellent air retention, so it’s not all that bad. 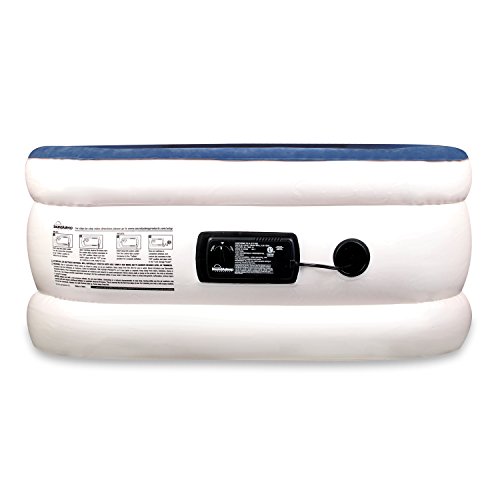 The mattress smelled a bit like plastic when we originally unpacked it, so there’s that as well. The smell simply disappears after a while, though.

One more thing we’d like to point out is the flocked top. This is a malady of all the flocked tops in the world, so we have to live with it. They collect dust and other particles like crazy. They’ll need a bit of cleaning quite often, but that’s the trade-off for added comfort and keeping our sheet in place.

So, what's the verdict?

It’s a definitive YES, as in air mattress that would definitely give us our money’s worth. You can just take a quick look at the bunch of our guides where these (usually) take the cake to see just how well-positioned Dream Series currently is.

There’s no beating this model in its price range and in price range 2-3 times higher, that's the bottom line.

Fox models are known for their durability and thick material used in their construction. That’s why they were nicknamed “beasts among air beds” (around our office), alongside some of SimplySleeper models.

They make even bigger of a trade-off when it comes to weight, so they’ll generally be even heavier than SoundAsleep products. It's only natural - after all, the PVC of this FOX is almost 50% thicker than most other air mattresses. 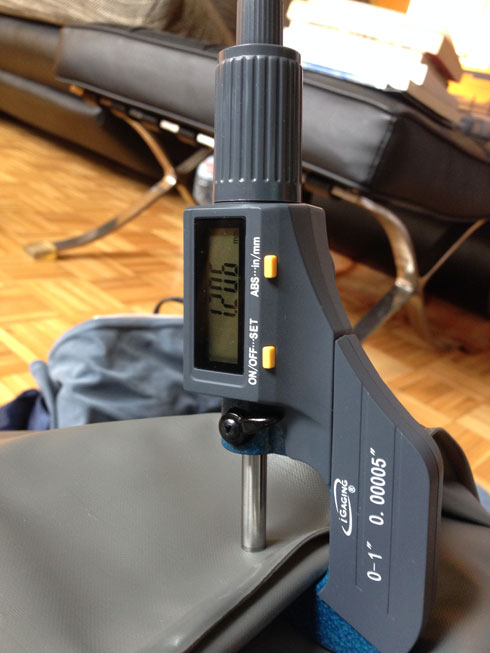 The fact sheet as provided by Fox:

Fox is well-known for their terse specification with a huge skimp on the details. Fortunately for us, we have more than one ways of learning all there is to know about a certain product. 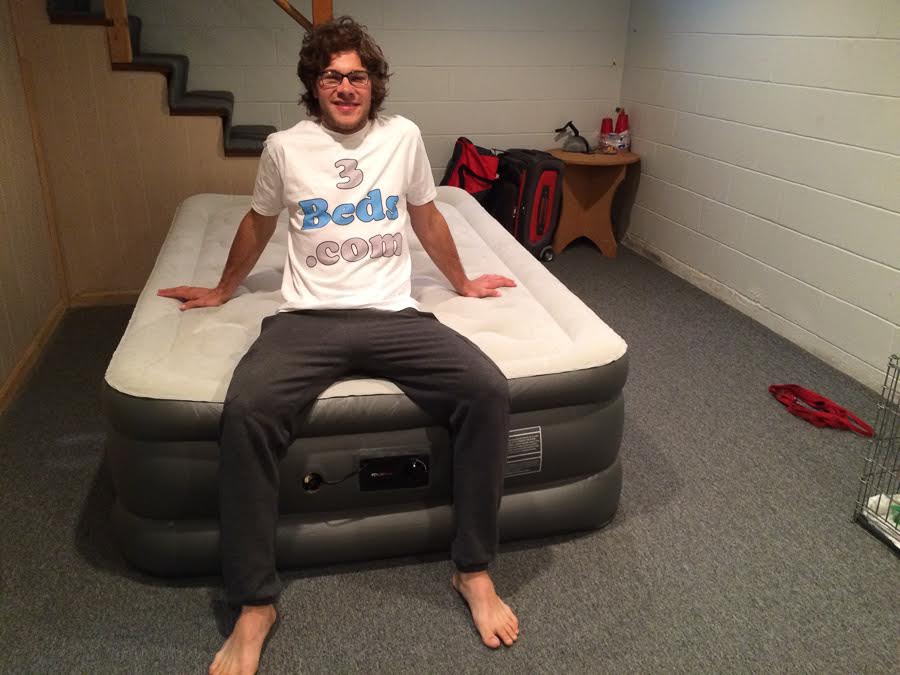 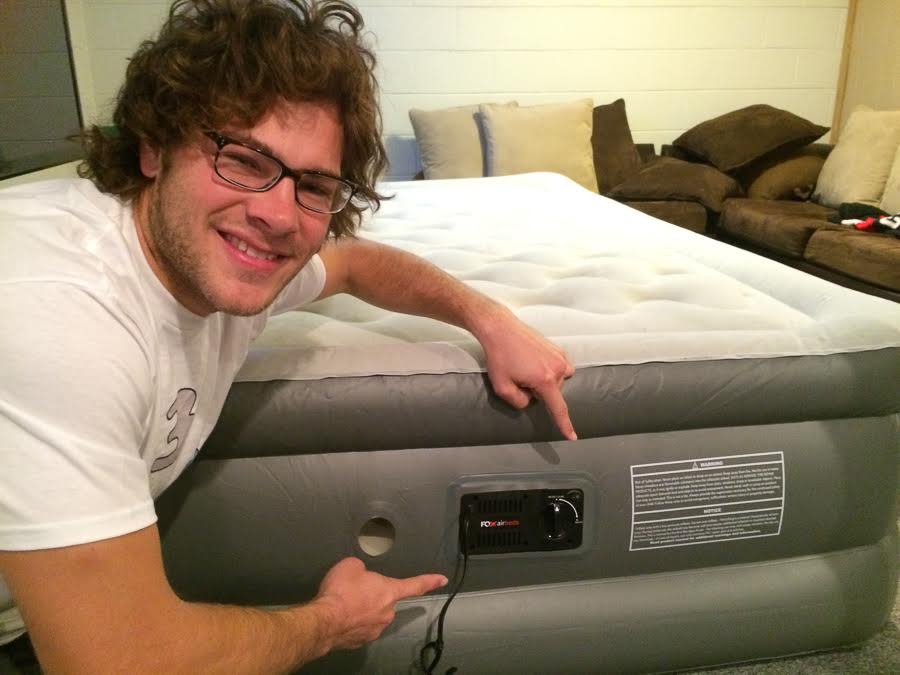 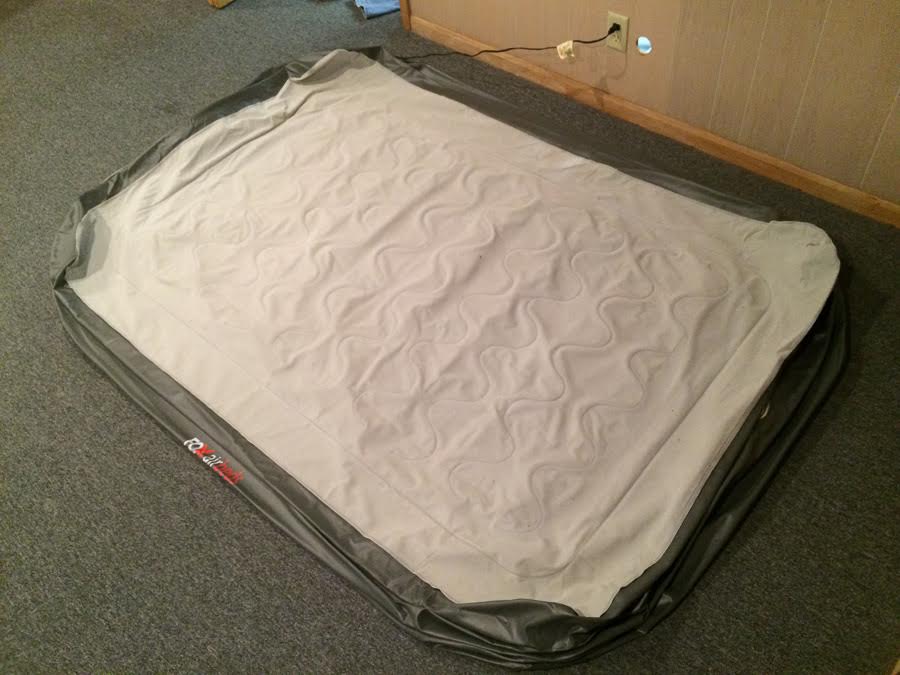 Some of the reported shortcomings:

2nd best best blow up mattress in a nutshell

As we stated already, durability and rugged construction are what sells this particular model. The built is, as one of the customers pointed out “unorthodoxly” solid, and the vinyl chosen really is much thicker than we’re used to. Our measurements don’t exactly show “43% thicker”, but it’s pretty darn close. The material amounts to some 0.60mm. The connections are also pretty tight, so the nickname “beast” is completely justified.

This all makes it our safest bet for still having a bed in the morning in the great outdoors since it’s practically impenetrable. In terms of durability, it is the best inflatable mattress out there.

On the other hand, though, the trade-off is the overall weight. It’s plenty heavier than what we’re used to, so it’ll present an additional challenge to tug around. We always say air mattresses are not a viable option unless you’re car-camping. Well, this goes three times for this Fox model. 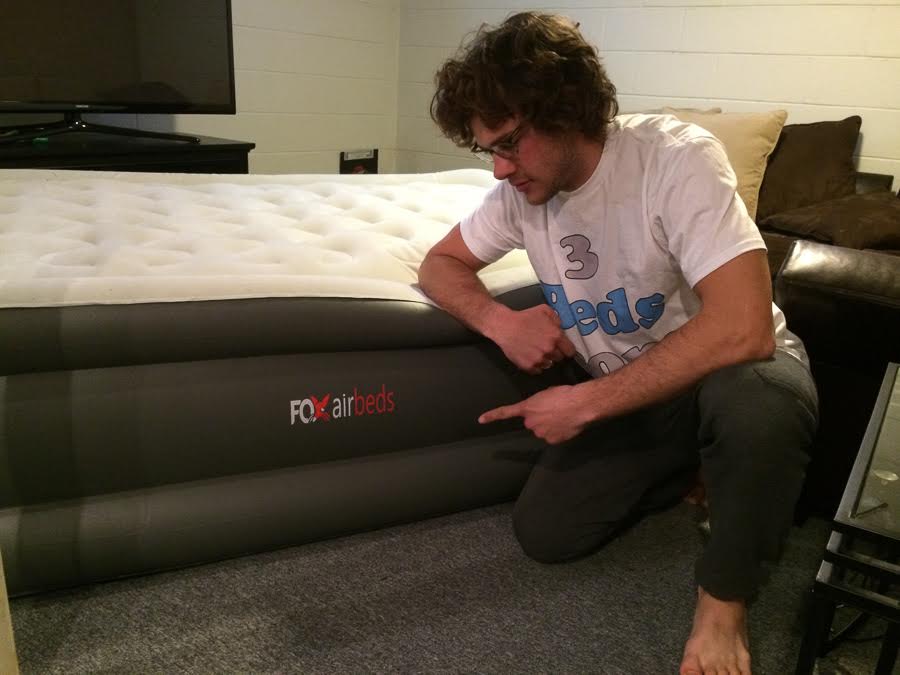 So, we have 22” of height paired with impenetrable material and rugged construction. It’s as close as we’ll get to a regular bed. Just throw your favorite set of sheets and try and spot the difference. When it comes to sheets, we’ve had some reports of standard ones not exactly fitting properly, so bear that in mind as well.

One of the big things is the so-called “super flat” surface. That’s how Fox called it, and the buyers agree. This means there will be no holes or bulges anywhere on the surface, EVER! To all of us dealing with inflatable furniture, this is a problem known all too well, so this can finally put our mind at ease as far as that’s concerned.

The design of the air chambers called “air-flow” is referring to their diamond shape and the ability to transfer air from one another with ease.

So, performances indicate camping all the way, the overall construction suggests home use. Whatever you pick, however, this model will not disappoint.

When we say “Intex”, we hear low prices and enough quality to make it worth our while.

This model is one of the top-sellers because of the good value for money. It's the rating sin the value for money category that pushed it into the TOP 3 twin airbeds. 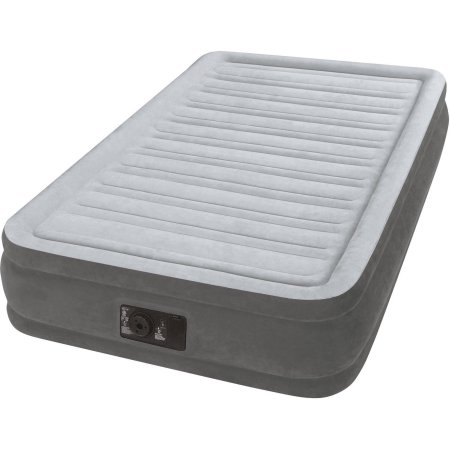 It probably won't be a choice of those looking for an inflatable bed that would last for years, but as a guest bed, it will do the trick.

Here’s what the users liked most: 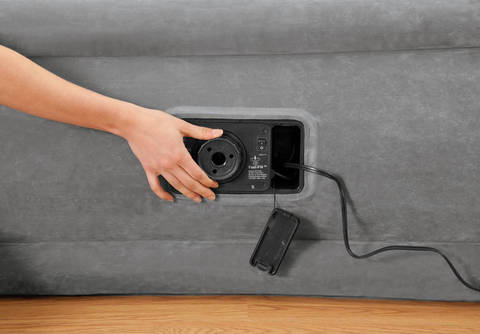 What we think about it

The main thing this Intex twin air mattress with built-in pump has going for it is its ratio between the quality and the price.

We can’t even begin to describe how un-scalable those two are. It really puts some things into perspective. In terms of value for the money spend, this is the best inflatable mattress. The price, however, is where it blows them out of the water. 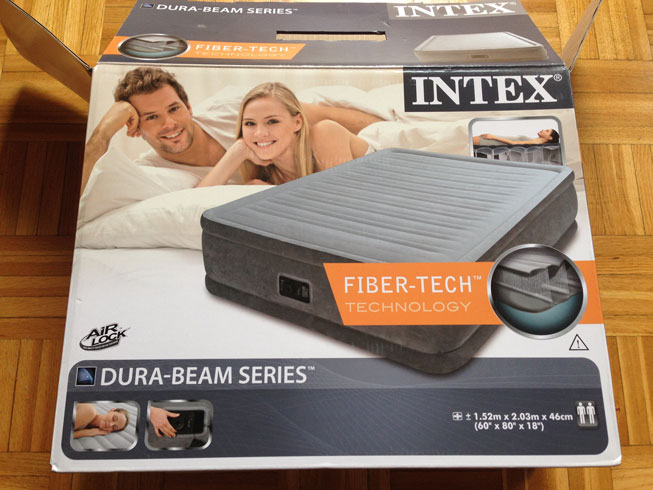 Dura-Beam Construction and fiber-tech build show us that this model has a couple of tricks down its sleeve as well. We haven’t really met fiber-tech before we started talking about this series of mattresses, so let’s say a word or two.

The main thing here lies in a huge number of strengthened vinyl fibers spreading between the top and the bottom of the mattress. They give it a lot of extra stability and make the structure much more solid than it would be.

So, if the budget is limited and the things are tight, don’t let that stop you from enjoying Mother Nature. You can get this little guy and give yourself a gift of camping like a sir/madam.

We hope you got some useful info out of our three digest reviews for this update.

We’re all mattress and camping freaks here, so you know we enjoyed gathering the data and, hopefully, helping you make the right choice.

The next update is due in exactly two months and we're already gathering new info and trying to stay on top of any changes in quality.